I love driving late at night. There’s something about the dark and the quiet that really speaks to me. I don’t need a bright sky on a breath-taking landscape, I need the stillness of the night to blanket my body and protect my soul. It soothes me. It takes away my worries and gives me permission to think, to rest. It comforts me.

It was a dark and quiet night when it happened, everything was still. I was driving back to Los Angeles from San Diego and had just had an incredible day. I was in a good mood. I was blasting Tinashe’s music (it’s perfect for a nighttime ride) and embracing the future, the possibilities. I was in a good mood, excited even. I even think I remember smiling.

And then my car’s rooftop crushed me. 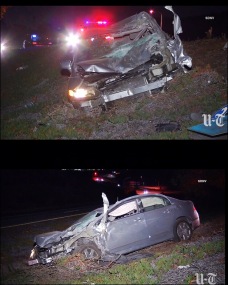 There was no time to think, no time at all to react. I saw two big, bright, yellow lights first, flying towards me, getting bigger and bigger and threatening me. The realization that my life was about to end, that I was meant to die in some freak, tragic accident came over me quick. It put me at ease and freed me from panic but, when the windows in my car shattered, and shards of glass pierced my eyes, I lost control. Not just of my 2010 silver Honda Civic, but of my life also. That’d be the moment I’d come back to months later, late at night, woken up in sweat by fear and panic, over and over again.

As my car swerved all across the I-805, all I remember is pure panic. It all happened so fast. A flying car had just crash landed over me. All I could see was black. All I could hear was the wind wheezing past my ears and my tires grating against the road. I heard a thud. I hit something. Then another, and another. Then my car crashed once more but this time it stopped. I tried to recover, to realize what had just happened, but I’ve watched so much TV that I only had one thought, “Oh crap. My car is going to explode. I need to get out!”  The door wouldn’t open. It was jammed. I panicked again. I kicked it open and fell to the floor on my hands and knees. It felt like wet grass. I was in a ditch. I climbed my way up into the freeway and stood. I began to wave my arms above my head when I noticed only the right one was moving. As I looked down at my left arm all I saw was red. Red everywhere. Blood.  I sat down on the grass and began to cry.

It wasn’t long before people showed up to help, to embrace me with their strength. I was in shock, skeptical of what had just happened. My body was trembling and refused to stop, even as sweaters and jackets were draped around me. I didn’t yet feel any pain, only confusion. I had just been in a terrible car accident, but I didn’t quite yet understand. I was in a daze, even as the ambulance came and took me away. It wasn’t until one paramedic asked the other about the driver in the other car that I understood.

“We can go. Dead on the scene. Nearly decapitated.”

A drunk driver, speeding down the wrong side of the freeway, rushing against traffic, collided against the wall divider before being propelled into the air, crushing my Honda Civic as it landed. At 75 miles per hour.  He did not survive, and I was lucky to. I had two fractured fingers, a broken elbow, and dozens of glass shards piercing my head, face, and left eye, arm, and hand. The wounds would eventually heal, but not without leaving deep physical and emotional scars. If someone had told me then that an awful car accident would break me, I would have laughed in their face. Life was good. It was good.

My fractured fingers would heal on their own. My broken elbow would be put in a cast for eight weeks and would require months of physical therapy and never regain full range of motion, even after surgery. My left eye would at first be completely blind, then little by little regain full vision. The wounds on my left arm and hand would mend.  The fear and anxiety of driving would be repaired through exposure therapy and months of cognitive therapy. My totaled 2010 Honda Civic would be replaced by a much newer one. And my life would continue, but not without paying a price first.

For months following the car accident I retreated back into the depths of depression. “What the fuck!?” was my only thought every single, breathing second. “When will life stop fucking with me, torturing me, making everything so complicated?” I had just moved to Los Angeles, started a new position as Assistant Director of Admission at a new school, and began dating again. Just when things were looking up, the sky fell, dragging me back into a bottomless, black hole. I lost all hope. After every thing I had been through up until this point, what else was there to live for? No matter how hard I worked at being happy and successful, something always took it all away. I felt hopeless and helpless. I saw no future, no reason to pick myself up and move forward. “What the fuck!?”

For months I laid frozen on the couch, watching re-runs of RuPaul’s Drag Race and Criminal Minds. I stopped seeing my friends, jumping into new adventures with every book that I loved, and at its worse, I stopped eating. I just didn’t have the energy to move from the couch. I’d wake and my eyes would be glued to the screen, away from my life, and then I’d sleep, and do it all over again. This had become my life. At the time I lived alone, and I didn’t have many friends because I had just moved. I was alone, afraid, and absent. I became reckless with my life and the value I once placed on it. And I hated myself for it every day. Every day I hated that I couldn’t understand the second chance I had been given, the opportunity to live and love and…live. Instead, instead there were times I wish I had died, that I had crossed into another world to see my Mom, to be with her away from a cruel, careless world. I was throwing it all away.

But I couldn’t live this way forever, so far removed from reality and wasting my young years. It was my Mom who brought me back to life. Two months after the accident, her birthday knocked the wind out of me. Two months had gone by and all I had done was drape myself in blankets and stare at a black box, away from my life, away from living. I thought of her all day on her birthday. I thought about how she was no longer here to celebrate it, to celebrate her life and all that she ever was, a strong, confident, kind, and generous woman. A woman that sacrificed her own life to make sure I would have one, one that was so much more than her own. Did she give it all up for me so that I could let a drunk driver take it away? Did my Mom teach me to be weak, a quitter, and afraid? No. She did not. She taught me better than that. She taught me to love, and to live, and to fight and to push through pain and sorrow and to rise above it all. She taught me to live. She stopped living because she was so sure she had taught me how to. That was her gift.

It wasn’t easy to get back up. Depression is not something that simply goes away when you decide that it should. It takes time, and effort, and support and love. All of which I had, all I had to do was reach for them. It took months for me to jump back in my car and drive without an overwhelming sense of anxiety. It took more than a couple panic attacks for me to be able to drive back into San Diego. It took over a year for me to put it all into words. My left arm still doesn’t extend all the way and I’m in different levels of pain everyday, but I’ve made peace with that. I’ve let go of the anger I felt towards the man that lost his life, driving drunk late at night and putting my life at risk. I’ve also forgiven him. But more than anything, I’ve embraced like hell the second chance I was given to live, and to love, and to LIVE.

I still have my bad days, days when I can’t drive or sleep well and all I can see is a car crushing me. But for the most part, for the most part I embrace every single day now. Every day is an opportunity for me to be successful and strong, to make a difference and leave a positive legacy behind me. More than anything, every day now I’m excited, excited for a future that seems so close and attainable now. I look forward to being a writer, to getting married and getting old, to raising my own kids, to teach them how to live and to love living. Life can be cruel, it is cruel. But life is also beautiful, and there is beauty in rising from the ashes, in learning to persevere and be strong, in getting through the hard parts. Because once you do, once you get through every rough day, there’s a new one. And every new day carries with it the possibility of being extraordinary.